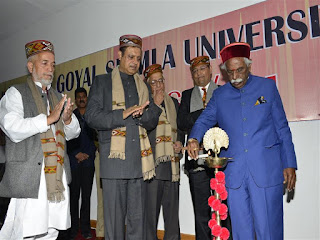 SHIMLA--------Governor Bandaru Dattatraya said that self-confidence was important in achieving the objective in life and it helps to move ahead on the path of development.

He was speaking during the convocation function of APG University at Shimla, today.

He appreciated the University administration for maintaining a high standard of education and research. He said that the aim of the University was to contribute to society through the pursuit of education, learning, and research at the highest international levels of excellence with a core value of freedom from discrimination is appreciable. He stressed on quality education and asked to carry out various social and welfare activities in education, health and welfare sector.

While congratulating graduating students, he said that convocation was a significant milestone in their academic growth. He said that the degrees and awards earned by the students was a result of the relentless hard work and immense dedication. This was a proud moment for all of them, as much as for instructors, guides, faculty members and parents.

He said that the quest for higher learning, which began in the portals of the college, would continue all through the professional life, in the future. Learning was a never-ending process and the firm foundation provided by alma mater would empower the students to explore new horizons, he added.

The Governor appealed all the degree holder students to serve the society and nation with compassion, dedication and love, without any monetary greed and live up to the expectations of the common man. He called upon the students to see such dreams, which would provide a solution to move forward. He said that the education and knowledge should not be restricted and should benefit the society as well, which gives the feeling of happiness to everyone.

Shri Dattatraya said that it was an era where the transition was taking place at a mind blowing pace and new concepts were being introduced. He said that established paradigms were being refined and research was opening new vistas. The change being driven by path-breaking research was both exhilarating and mesmerizing, he added.

He said that knowledge was the emerging currency of the world and youth were the power of the nation. He appealed the students to move forward with new innovations and contribute to building a new India. He said that this was an era of technology and only one who has the strength of technology could compete with the world, but character building along with knowledge of technique was also very important. He said that today, girls were excelling in every field of development and expressed hope that the girls of this institute would also give their best. He urged the degree holders to adopt entrepreneurship instead of moving behind the jobs so that they could also provide employment to others as well.

The Governor also awarded degrees and medals to the meritorious students on the occasion.

Chancellor of APG University, Dr. Rajat Mathur welcomed the Governor on the occasion.

Vice-Chancellor of the University Prof. Ramesh Kumar Chaudhary briefed the activities and achievements of the institute.

Embassy of Togo, Head of Mission Charge affair, Kondi Mani, 2nd counsellor of Embassy of Togo, Yawo A. Edem Akpemado, members of faculty and other prominent people were also present on the occasion.