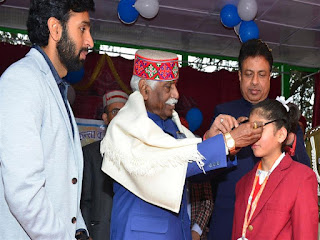 SHIMLA--------Governor Bandaru Dattatraya launched major screening campaign from government senior secondary school Portmore here today on the occasion of the Children Day which would benefit around ten thousand students of the Shimla district. The campaign was organised under the auspices of Indian Vision Institute and Esselar Vision Foundation.

Speaking on the occasion, the Governor said that in the present era of competition, our routine has changed but it was must that we infuse our culture, thoughts and moral values along with adoption of technology. He appealed the school girls to practice yoga on regular basis, which was also part of our culture.

He congratulated the students on Children Day which was celebrated on the birth anniversary of former Prime Minister Pandit Jawahar Lal Nehru.

The Governor also appreciated the efforts of Indian Vision Institute and Esselar Vision Foundation for providing best opportunities to the students with low eyesight.

Bandaru Dattatraya launched the campaign by distributing spectacles to the girl students of the Portmore school.

Principal Narender Kumar Sood presented the vote of thanks.