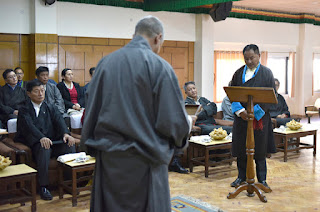 Dharmshala------At the successful completion of the tenure of former Speaker Khenpo Sonam Tenphel, Pema Jungney was sworn in today as the new Speaker of the 16th Tibetan Parliament-in-Exile at a swearing-in ceremony held at Gangchen Kyishong.  The oath of office was administered by Kargyu Dhondup, the Chief Justice Commissioner.

The 16th Tibetan Parliament elected Ven Khenpo Sonam Tenphel and Pema Jungney as joint Speakers of the Tibetan parliament. Ven Khenpo Sonam Tenphel chaired the first half of Speaker's term–from 30 May 2016 to 30 November 2018–and the remaining term—from 1 December 2018 to 30 May 2021) will be chaired by Pema Jungney. Although appointing two Speakers on a tenure-sharing basis is not specified in the Tibetan electoral rules and regulations, it is not unprecedented. A five-year term of Speaker was shared during the 14th Tibetan Parliament.

Pema Jungney was born in 1959, Ruthog Jangtod, Tibet. He attended CST Shimla and later, secured Shastri, Acharya and B.Ed degrees from the Central Institute of Higher Tibetan Studies, Varanasi. He served as a teacher at Sakya Centre, Rajpur for three years and at New Tibetan School at Bir, Himachal Pradesh for two years. He is the former Speaker (then termed as Chairman) of the 13th TPiE (earlier called as ATPD). He has also written two volumes of a book titled 'Details on Evolution of Tibetan Democratic Polity'. He is also a member of the Charter Drafting Committee. In his over-28 years' service in the Tibetan Parliament, he has served as the Chairman of around 30 parliamentary committees. He is also a visiting speaker at various workshops organised by CTA and NGOs. Pema Jungney is the longest-serving parliamentarian in the 16th TPiE and presently he is the Speaker-elect for the second half of the term. He was previously elected to the 10th, 11th, 12th, 13th, 14th and 15th Tibetan parliament.