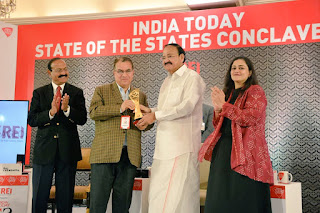 Interacting with media persons later, Suresh Bhardwaj said that state is giving utmost importance to education sector and efforts were being made to strengthen educational institutions. He said that the state government has undertaken the task of recruiting 7000 teachers of various categories to achieve this objective. He further said that teachers were being made accountable for learning outcomes which would further strengthen the education system.

He said that a new scheme, Atal Adarsh Awasiya Vidyalaya has been launched for ensuring quality education with ultra modern facilities. 50 percent of these schools are reserved for girl students, he added. He further said that efforts were being made to ensure complete personality development of students along with imparting good education. To achieve this, introducing smart classes, incorporation of chess/yoga, ethical education in educational curriculum are some initiatives, the major one out of all these is sensitization about drug abuse in order to motivate youth to opt for constructive goals in life, he added.

Education Minister said that a new scheme Akhand Shiksha Jyoti Mere School Se Nikle Moti has been launched to invoke nostalgia and connecting alumni to roots for inspiring the students as well as channelizing for betterment of infrastructure, undertaking various social activities like promoting plantations and clearance of plastic and polythene material from the surroundings.

Suresh Bhardwaj said that a placement cell has been established in Higher Education department and an incubation centre will be established in Noida dovetailing it with Medha Protsahan Yojana which has a provision for providing rupees one lakh assistance to students who want to appear in examinations for taking admission in medical or engineering, competitive exams, civil or allied services.