Nomenclature of PGT of the School would be changed to Lecturer: Chief Minister 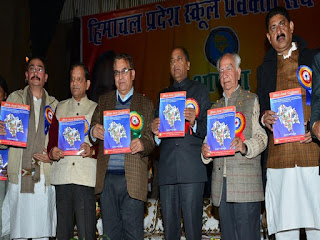 SHIMLA---- Chief Minister Jai Ram Thakur while addressing the State Level Education Conference on Universal, Free, Compulsory and Quality Education for all in Auditorium of Chaudhary Sarwan Kumar Agriculture University, Palampur in Kangra district today announced that the nomenclature of PGT of the School would be changed into Lecturers in the Education Department. This Conference was organized by the Himachal Pradesh School Lecturer's Association (HPSLA). He also congratulated the people of state especially Sikh Community on the occasion of Guru Nanak Dev Jayanti.

The Chief Minister said that he was particularly proud of the strides the State has made in the field of education. "We have achieved a significant shift in education, both in qualitative and quantitative terms," he says, pointing to major infrastructural improvements in educational institutions. Recruitment of thousands of trained teachers was in pipeline so as to ensure that every institution has adequate staff, he added.

Jai Ram Thakur said that the State Government has introduced several schemes for making Himachal Pradesh as an education hub of the country. He said that Medha Protshan Yojna has been launched to provide financial assistance to meritorious students to prepare for various competitive examinations. He said that Atal Adarsh Vidya Kendra would be opened in the State for imparting quality education to the students.

The Chief Minister said that one should be a learner throughout his or her life only then one can grow in life. He said that teaching was a very noble profession and biggest profession in nation building. He said that no nation can progress until it has dedicated and qualified team of teachers. He said that thus the role and duty of teachers become further more important.

The Chief Minister said that the promotion quota for school lecturer would be increased from 50 percent to 60 percent and posts of Vice Principal would be created in Government Senior Secondary Schools in the State. He also announced one time withdrawal in holding annual increment of teachers having low result.

The Chief Minister also released a souvenir on Universal, Free and Quality Education on the occasion. This souvenir has been edited by Prem Sharma.

He also honoured the meritorious students on the occasion.

Former Chief Minister and Member of Parliament Kangra Shanta Kumar said that teachers have been entrusted with the biggest responsibility to transform the society. He said that he was happy to know that Himachal Pradesh has been awarded as the best State of the country in the field of education for which he congratulated the Chief Minister and the Education Minister. He said that it was the need of the hour to inculcate moral values amongst the students. For this, Yog and moral education should be made an integral part of our educational curriculum, he added. He said that the State Government was working with dedication and commitment to come upto the expectations of the people.

Health and Family Welfare Minister Vipin Singh Parmar said that State was poised to emerge as the most progressive State of the country under the dynamic leadership of Chief Minister Jai Ram Thakur. He also expressed his concern over increasing tendency of drug abuse amongst the students. Teachers should come forward to nib this evil in the bud, he added.

Director Higher Education Dr. Amarjeet Kumar Sharma assured the Chief Minister that the teachers of the State would ensure that Himachal Pradesh emerges as an education hub of the country. He also highlighted Guru-Shishya tradition in the country. It was unfortunate that today the respect for the teachers is slowly fading away, which needed to be introspected, he added.

General Secretary of the Association Sanjiv Thakur welcomed the Chief Minister and other dignitaries present on the occasion. He said that the dropout ratio in plus one and two classes was minimum, which shows the sincerity and dedication of the School Lecturers.