CM for common platform for overall development of Himalayan States 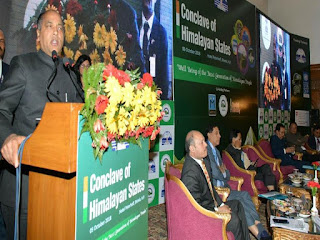 CM for common platform for overall development of Himalayan States

SHIMLA----All the Himalayan State should come on common platform for raising the issues of common interest before the Union Government for overall development of the Himalayan States. Chief Minister Jai Ram Thakur said this while addressing the 'Conclave of Himalayan States' organized by the HP State Council for Science, Technology and Environment in close partnership with the Integrated Mountain Initiative and the Shoolini University, Solan on the theme 'Well Being of the next Generation of Himalayan People' here yesterday. As many as eleven Himalayan States of the country and Nepal participated in this conclave.

The Chief Minister said that Prime Minister Narendra Modi was aware of the developmental needs of the Himalayan States thus several new schemes aimed at the development of hilly areas have been launched by the Union Government. He said that this Conclave would go a long way in calling out a joint strategy for development of three key sectors viz Agriculture, Tourism and Power Generation.

Jai Ram Thakur said that hydro power sector was vital for the development and growth of the Himalayan States. He said that still these states were facing some bottlenecks, both natural as well as other. He said that effects of climate change on precipitation pattern and hydrological regime were most critical to hydropower generation, especially in the Indian Himalayan region, thus Himalayan states need to explore the unconventional adaptation route driven by human and capital investment in Science and Technology that has to be innovative and tailored to different terrains and topography.

He said that  persistent cause of concern has been fast melting Himalayan glaciers leading to an increase in number and size of Glacial Lake Outburst Floods, which are not only dangerous for those residing downstream,  but also challenges the sustainability of hydro power in hilly states. He said that hydro power infrastructure in the State faces pressing risk from increased flooding, landslides, sedimentations, and dangers from extreme weather events.

Jai Ram Thakur said that all the Himalayan States should collectively urge the Centre to place the hydro electricity project under the renewable energy category, since most of the projects were run of the river type which causes almost no damage to environment.

The Chief Minister said that almost 90 per cent reside in rural areas in Himachal and 58 per cent of these rely on agriculture as a source of their household income and employment. He said that the farmers continue to survive on fragmented landholdings, in some cases even less than a hectare, which was insufficient to ensure food and income security leave aside capacity for adaption to climate change impact.

Jai Ram Thakur said that bestowed with natural beauty and experience, the hilly states invariably rely on nature-driven tourism sector. He said that growing popularity and propagation of mass tourism is detrimental to the carrying capacity of our urban centres, local communities, and ecologically sensitive areas in Indian Himalayan Region (IHR). He said that it was a matter of concern that tourism was getting concentrated in fewer pockets that have been traditional choices for tourists. For instance, 50 per cent of the tourist invariably only visit urban centres of Shimla, Kullu, and Kangra districts of Himachal Pradesh, he added.

The Chief Minister said that the State Government has taken resolute policy measures to aid and assist the adoption of responsible tourism in the state through different initiatives and policies specific to alternate low-impact tourism options such as eco-tourism, rural home stays etc. He said that the State Government has been careful in diligently identifying the possible ways to conserve the beauty of our Devbhoomi, Himachal.

Union Agriculture Minister Radha Mohan Singh said that Prime Minister Narendra Modi has a vision of doubling the farm income by 2022 and for this several initiatives have been taken. He said that the Himalayan States also have great potential by adopting zero budget natural farming for value adding to their produce.

The Minister said that as many as 26 CA Stores have been set up in Himachal Pradesh, Jammu and Kashmir and Uttrakhand with a total capacity of one lakh MT under National Horticulture Mission.  Similarly, 20 Processing units have been established in North Eastern States, he added. He said that Sikkim state has taken a lead in organic farming which has actually transformed the economy of the farmers of the State.

Books on 'Wild Edible Fruits' and 'Traditional Crops of Himachal Pradesh' brought out HP Council for Science, Technology and Environment were also released on the occasion.