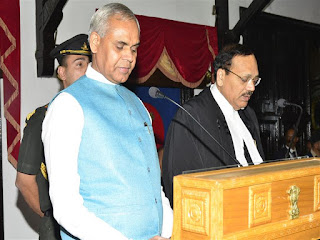 SHIMLA----  Justice Surya Kant today sworn in as the Chief Justice of the Himachal Pradesh High Court. He was administered oath of office by Governor Acharya Devvrat in a simple but impressive ceremony held at Raj Bhawan. Chief Minister Jai Ram Thakur was also present on the occasion.

The ceremony took place at the Darbar Hall where Chief Secretary B.K. Agarwal read out the Warrant of Appointment issued by the President of India.

Justice Surya Kant was born on February 10, 1962 in a middle class family of district Hisar in Haryana. He did graduation in 1981 from the government post graduate college, Hisar and earned Bachelor's degree in Law in 1984 from Maharishi Dayanand University, Rohtak. He started practicising Law at the District Courts, Hisar in 1984 and shifted to Chandigarh in 1985 to practice at the Punjab and Haryana High Courts. He specialized in Constitutional, Service and Civil matters. He represented a number of Universities, Boards, Corporations, Banks and the High Court before earning the distinction of being appointed the youngest Advocate General of Haryana on July 7, 2000.

He was designated as Senior Advocate in March, 2001. He held the office of Advocate General, Haryana till his elevation as a permanent Judge to the Punjab and Haryana High Court on January 09, 2004. He was nominated as a Member of the National Legal Services Authority on February 23, 2007 for two consecutive terms. Justice Surya Kant earned another distinction of standing First Class First in his Master's degree in Law in 2011 from the Directorate of Distance Education, Kurukshetra University, Kurukshetra. He remained a keen debater since his student days and he is a passionate environmentalist associated with various national and international NGOs and Law Associations. He has also attended various national and international conferences.