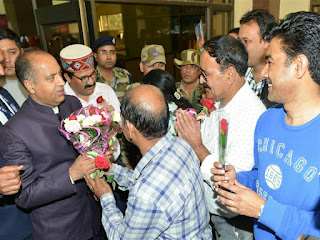 SHIMLA----Chief Minister Jai Ram Thakur announced reduction in minimum bus fare from Rs. 6 to Rs. 5. He made this announcement while addressing the media on the sidelines of 'Abhiyas Varg', the meeting of BJP workers of Mandi Parliamentary Constituency held at Dev Sadan in Kullu today.

Jai Ram Thakur said that the previous State Government increased the bus fare soon after assuming office by 30 percent, but the present State Government enhanced the fare by just 20.69 per cent so that people were not burdened unnecessarily. He said that now, in order to facilitate the commuters, the State Government has further reduced the minimum fare for Rs. 6 to Rs. 5.