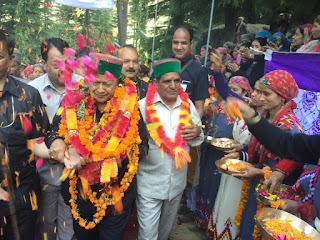 KULLU ----Chief Minister Shri Virbhadra Singh who was addressing a public meeting at Chowai, in Ani sub-division of district Kullu today said that the government was making efforts to connect every village by roads. Roads were life-lines of development and lead to socio-economic development and effect betterment in lives of people.

During last three years over 1366 km new motorable roads and 134 bridges have been constructed and as many as 255 villages have been provided road connectivity.  Under PMGSY 241 DPRs amounting to Rs. 532 crore for 2267 km. road length have been got sanctioned, said the Chief Minister.

He said the priority of the Government was education, health and roads besides welfare of the common man. He said that the quality of education had to be maintained. As of now we have highly trained teachers but it had been observed that few teachers spend most of the time achieving their self-interests. The trained teachers should concentrate not only to get the students pass  the exams but their motive should be that their students should excel in academics securing beyond 90 percent. The students also should strive to increase their percentage beyond 90 percent. The Government intends to strengthen the educational infrastructure now. Himachal today was second in the field of literacy after Kerela, he said.

Chief Minister said that as far roads were concerned there is a network of more than 34500 Kilometers of roads in the state.  We were also committed to construct tunnels in hills to reduce the distance between places and make the tribal and hard areas accessible to people in all seasons. He said that the Rohtang tunnel was due to complete shortly. Similarly, there was a proposal to construct a tunnel beneath Jalori Pass so that distance between Ani and Kullu gets short enough, he added.

He also stressed upon conservation of customs and culture.

• Announced starting of science and commerce classes in GSSS Chowai and construction of science block.

Pradhan, Chowai Shri Tara Chand welcomed and honoured the Chief Minister and other distinguished guests on the occasion.