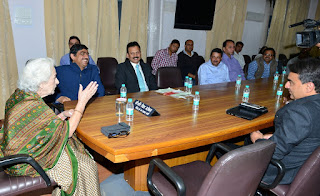 Speaking on the occasion, Smt. Stokes said that the Information Technology department has set up about 600 Aadhaar Enrolment Centres across the State for enrolment coverage. She said that for effective monitoring of enrolment in these Centres, a Mobile application has been developed by the department of IT which is for the internal use of all aadhaar enrolment centres working in Himachal Pradesh. It enables authorized users to upload the data of number of enrolments done in their respective centres, she added.

The Minister said that the other application launched is the Himachal Forms Portal which is a single source repository of all State Government forms which are used by citizens, businessmen, employees etc. These forms are categorized as G2C, G2E, G2B. Total 210 forms of 25 departments are available for download by the users. All 210 forms are available in PDF format and 146 of these forms are in fill-able PDF format so that the user is able to download and fill in the required details to finally print the computer typed version of the form, she added.

She said that these filled printed forms can then be submitted at the respective departmental offices for availing the Government services. The citizens would not be required to obtain the physical copies before applying for the services, for which currently they have to visit concerned agencies. The forms in Himachal portal are also linked to Public Service Guarantee (PSG) Act so that the users become aware about the time limit for the delivery of PSG services for which they are filling the form, she disclosed.

Additional Chief Secretary IT Shri Sanjeev Gupta apprised the Minister about the features of the applications being launched. Briefing about the Aadhaar coverage in the State, he said that State has already covered most of the population. However, Aadhaar enrolment is a continuous process and various types of enrolments were to be done including remaining population who have not yet enrolled, new born babies, people who require updation of demographic data like address, mobile number, date of birth etc. and biometric updation of the children attaining the age of 5 and 15, he informed.

Officers of Information Technology, NIC and various departments were also present on the occasion.            000