CM stressed on unity for deriving benefits of development 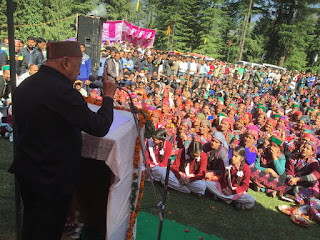 CM stressed on unity for deriving benefits of development

KULLU ----While addressing a mammoth gathering at Ladagi, (the remote corner of Ani sub-division), after laying foundation stone of the Government Senior Secondary School to be constructed at a cost of Rs 45 lakhs, Chief Minister, Shri  Virbhadra Singh said that unity was the key to development and people should stand united for deriving the benefits of development.

He said that the people should work hard for themselves as the government can only provide assistance for development activities, but to prosper ahead the people have to stay united.

He said that it was the Congress Government which opened Government Degree College at Ani in Haripur where it was observed that the girl students had outnumbered boys. "We were committed to provide quality and basic education at the very door-steps of the people so that every child will be well educated" he said. He stressed upon to providing education to girl child.

Besides, to cater to the health needs, three medical colleges were being opened in the State besides AIIMS in Bilaspur. The Chief Minister said that 24  ITI's and  two  Engineering  Colleges were opened during last three years besides IIT at Kamand in Mandi so that the students of the State could pursue higher education within the State.

He also directed the PWD to complete the work on the school building within 11 months period for which the foundation stone was laid today.

Announcements made by Chief Minister

President, Pradhan Parishad, Mahinder  Kainth also welcomed the Chief Minister and thanked for coming to Ladagi, the most remote area of Ani sub-division. He also placed demands of the area before the Chief Minister