Our volunteers would try to help the migrating Hindus and Sikhs in every possible way, but we object to the migration of Muslims from Afghanistan to India 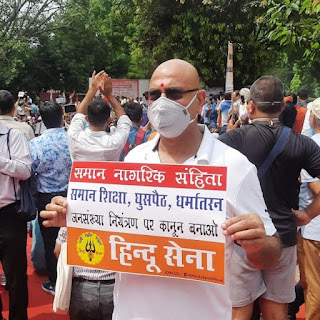 Vijyender Sharma
Jawalamukhi ----The Vishwa Hindu Parishad has opposed the move by the Indian government to open its gates for Muslim Afghan refugees, who are fleeing the country after the Taliban took over the country.
"We should not give refuge to Muslims, who are fleeing Afghanistan, in India," local Convenor of Vishav Hindu Parishad, Acharya Himanshu Bushan Dutt said , he argued that there was an imminent danger of terrorists entering the country under the garb of refugees. "We have clearly told the Indian government that there is a clear and present danger that terrorists may enter India under the garb of these Muslim refugees."
Dutt said these were the same people who "rejoiced" when Bamiyan statues were destroyed. "These Muslims have been the oppressors in Afghanistan for a long time. What is the rationale of giving refuge to oppressors," he asked.

Himanshu Bushan Dutt cited the example of Rohingyas in India. He said that Rohingyas came from Bangladesh and now they have been found involved in terrorism. "I believe that not all Muslims in Afghanistan were responsible for the oppression of Hindus and Sikhs, their minorities, but they remained mute spectators and they clapped. They are equally responsible for the atrocities on minorities in Afghanistan.