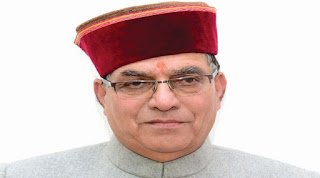 SHIMLA----Urban Development Minister Suresh Bhardwaj said here today that the Shimla water supply and sewerage project aims to meet the water demand of Shimla and adjoining areas. The proposed project would provide 67 MLD additional water to the town. The project has been prepared to ensure bulk water supply to Shimla for next 30 years from a sustainable source of river Sutlej.

Suresh Bhardwaj said that in the recent cabinet it was decided that the Shimla Water Supply and Sewerage Services Delivery Program for improvement of WSS services in Greater Shimla Area would be funded by World Bank with total financial outlay of $ 250 Million (INR 1813 Crore).

Minister said that the total requirement of the Shimla Planning Area including tourist and future satellite towns in the year 2050 is estimated as 107 MLD. Currently Shimla city  gets 40 MLD of water form LWSS Giri and LWSS Gumma. Based on the studies and need assessment carried out under the program it was decided to build a new bulk water scheme of 67 MLD from River Sutlej. He said that the work for the same has already been awarded.

The project would provide bulk water supply to Shimla city thus facilitating continuous pressurized water supply 24X7 to the people of the area.