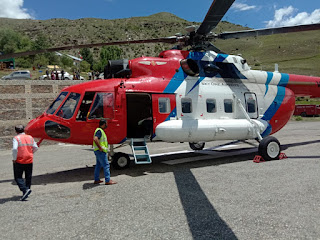 Chief Minister directed the officers to deploy the chopper in its maiden flight for the evacuation of the people, including tourists, who have been stranded in the hinterland Lahaul-Spiti district for five days after roads closed down due to flash floods.

In its day-long sorties, the chopper would evacuate almost all stranded people from Tandi and would drop them at Kullu from where they would be sent to their destinations in public transport by road.