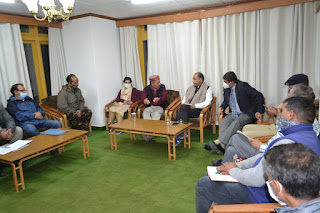 MANALI------Chief Minister Jai Ram Thakur held a meeting with the District level senior officers of Lahaul Spiti district at district headquarter and directed them to ensure effective implementation of policies and programmes of the State Government.

Chief Minister sought detailed report from PWD, Jal Shakti Vibhag, HPSEB, Agriculture and Horticulture on losses occurred due to flash floods. He directed Jal Shakti Vibhag to prepare a holistic and sustainable plan based on modern scientific studies for providing drinking water supply throughout the year.

Jai Ram Thakur said that meeting would be convened soon to sort out the issue of pending permission from BRO with respect to laying of underground power supply cable through Atal Tunnel Rohtang. He said that it was important since the Thirot power house was the only source of power.

He also directed the officers to prepare damage report regarding damage in Spiti sub division.

Chief Minister also asked the BRO Commandant to ensure a time line for restoration of main road in Udaipur area.

Deputy Commissioner Neeraj Kumar and other officers were also present on the occasion.

Later, in the morning Chief Minister did aerial survey of the flood affected areas upto Thirot to take stock of the loss in the area.