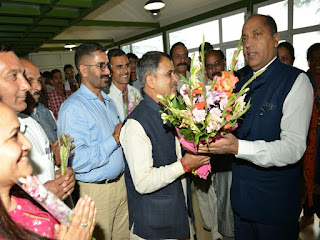 SHIMLA----------Chief Minister Jai Ram Thakur urged the party workers to ensure effective dissemination of policies and programmes of the State Government upto the grass root level so that people could derive benefits from these welfare schemes. Chief Minister was addressing the delegation of Mandi district headed by newly appointed Chairman of APMC Mandi Dalip Thakur who had called on the Chief Minister for thanking him for his appointment as Chairman.

Chief Minister said that the BJP today has emerged as a biggest political party of the world due to the dynamic leadership of Prime Minister Narendra Modi and National President BJP Amit Shah besides hard work and dedication of the common party workers. He said that the workers should ensure that they may have regular contact with the common people and keep the momentum going.

Jai Ram Thakur said that Central and State Governments were committed for welfare of every section of the State with special focus on those areas which remained neglected so far due to one reason or the others.