Efforts on for holistic development of tourism potential: CM 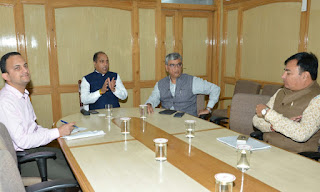 Efforts on for holistic development of tourism potential: CM

SHIMLA--------The State Government is working for holistic development of tourism potential in the State by giving special thrust on eco, culture and religious and adventure tourism. This was stated by Chief Minister Jai Ram Thakur while presiding over the presentation made by Hitesh Trivedi of Meehit Group regarding tourism development in the State, here today.

The Chief Minister said that the state government was making all out efforts to fully harness immense tourism potential available to make the State self-reliant and providing adequate employment and self-employment opportunities to the youth.

He said that the state government would develop Janjehli area in Mandi district from eco-tourism point of view, Bir Billing in Kangra district as para-gliding and adventure sports destination, Pong Dam for water sports and Chanshal area in Shimla district for winter sports and skiing.

Jai Ram Thakur said that government would develop Shiv Dham at Mandi town under which replicas of twelve Jyotrilinga would be created to attract tourists as well as locals. Under this project, Mandi lake would also be developed besides introducing the concept of Beas Aarti on the analogy of Ganga Aarti.

Additional Chief Secretary Ram Subhag Singh, representative of Meehit Group and other senior officers were present on the occasion.