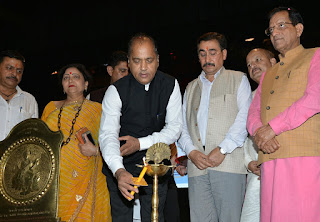 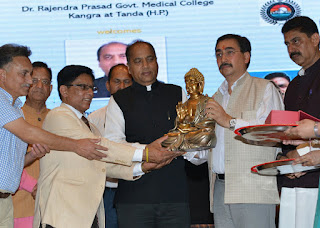 While appreciating the skit presented by the students regarding drug abuse and its vices by the students, Chief Minister said that it was unfortunate that drug epidemic continues to rage amongst youth  of our nation which was an area of concern. He said that  drugs have the potential to thwart the bright  future of our nation. He urged the youth the fight this social vice by helping the young people to come out of the trapped in the vicious cycle of drug abuse.

Shri Jai Ram Thakur said that  education, employment and empowerment  were three key elements that contribute towards the progress of a nation and all these depends of how well our youth is educated and empowered. He said that it was important to channelize the energy and intelligence of youths in the right direction and provide them employment opportunities as per their potential or they may move to a wrong track in life.

Chief Minister announced enhancement in stipend of MBBS students of the State fro existing Rs 15000 per month to Rs 17000 per month. He also announced Rs 1.50 crore for providing latest audio-video system in the Auditorium of the College. He said that posts of Radiographers would be filled soon and two buses would be provided to facilitate the students in the campus.  He said that Physiotherapy Department would be strengthened.

Health Minister Shri Vipin Singh Parmar said that the performances by the students of the college was par excellence and shows the creative talent of the students. He said that the State was committed to make Himachal Pradesh a ideal state of the country.

Principal of the College Dr Bhanu Awasthi while welcoming the Chief Minister detailed various achievements of the  college. He said that the college has been ranked 35th best college of the country and third in North India by India Today magazine which was a matter pride for the students and faculty  of this institution and also for the people of the State.

SCA President Shri Munish Pandit welcomed the Chief Minister and other dignitaries present on the occasion.

A colourful cultural programme was also presented by the medical students on the occasion.