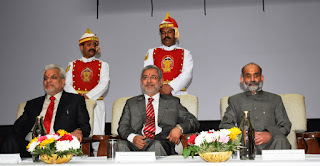 SHIMLA-----  Justice Kurien Joseph, former Judge of the Supreme Court said that  redressal of disputes with mediation and reconciliation helps in keeping peace and harmony between the litigants besides  with this system pressure of cases is reduced in the courts. He was speaking as Chief Guest in a conference on 'ADR mechanism, Referrals and Mediation techniques' organized by the District Legal Services Authority under the aegis of State Legal Services Authority, at Atal Sadan Kullu today. Senior judicial officers from seven districts and trained advocates for ADR participated in the conference.

Justice Kurian Joseph said that mediation is often the notion of settling civil matters, but its scope should be broadened further. The Judiciary has  encouraged out-of-court settlements to alleviate the increasing backlog of cases pending in the courts. He said that this system needs to be resolved by involving Executives Magistrates at district and sub-divisional levels to solve maximum revenue and other civil matters. This would reduce the backlog of cases in the courts and people will get accessible and affordable justice near to their door steps. He said that settling disputes through ADR provides relief to both parties and there was no dissent of win and defeat.

He said that the Executive Magistrates  should be imparted training  of alternative methods of dispute redressal which would further reduce the unnecessary burden on the courts and those who were in queue of justice will get great relief. He said though the effort of settling cases through mediation in the country had been very successful and thousands of disputes were being resolved through this process. The judiciary has trained officers and advocates.

While presiding over the function,  Chief Justice of HP High Court Justice Dharm Chand Chaudhary said that there was a diverse process of alternative dispute resolution methods including Mediation, Lok Adalts and Reconciliation where hundreds of disputes were resolved every day. He said that during mediation the litigant parties resolve their dispute without intervention of any third person. In this, the arbitrator decides the matter in a semi-judicial case after hearing both sides.

Justice Chaudhary said that this process of resolving the dispute in our country was not new. Over the centuries, the Panch at the village level had been resolving the disputes between parties. Settlement of disputes in a cordial atmosphere satisfies both parties. This process is very simple and affordable. He said that the parties were given an opportunity to choose a cordial solution. Privacy and confidentiality was also maintained during redressal of dispute. However there was a scope of appeal  in certain cases.

He said that second conference will be held in Shimla in  near future for the remaining five districts of the state. He asked subordinate courts that redressal of disputes should be encouraged on a large scale through alternative modes. He said that the ultimate goal of judiciary was to provide justice to the people.

Judge of H.P. High Court Justice Vivek Singh Thakur said that ADR system for resolving the dispute was modern,  dynamic, interactive and structured practice. He said mediators should be well versed on the matter placed before them for mediation. Pros and cons should be taken care before deciding litigations. Both sides should be told good or worse of mediation.

He said that the process of alternative dispute resolution was voluntary and there should be no pressure on the parties. He asked the panchayats to settle small disputes so that the common people get rid of going to the court. He said that the parties should have full faith in mediation and such practice should be encouraged.

H.P. High Court Judge Chander Bhushan Barowalia said that mediation was an effective medium of dispute redressal and it also helps in establishing peace in society. He said that this system is well practiced in tribal areas of the State even today.

He said that there was a difference between negotiation, conciliation and mediation. Negotiation was a non binding procedure in which discussions between the parties are initiated without intervention of any third party. In Conciliation, parties submit to the advice of a conciliator, who talks to the each of them separately and tries to resolve their disputes. In Mediation, there was a non-binding procedure in which an impartial third party known as a mediator tries to facilitate the resolution process but he cannot impose the resolution, and the parties are free to decide according to their convenience and terms.  Arbitration was a method of resolution of disputes outside the court, wherein the parties refer the dispute to one or more persons appointed as an arbitrator who reviews the case and imposes a decision that is legally binding on both parties.

District & Sessions Judge Purender Vaidya in his welcome speech said that it was the need of hour to evolve alternative dispute resolution mechanism keeping in view large docket of litigation before the courts. The objective of mediation was to enable the parties to reach mutual and honourable settlement. The role of Mediator was to facilitate settlement of dispute by negotiations between the parties.