Govt. to launch scheme to buy back non-recyclable polythene: CM 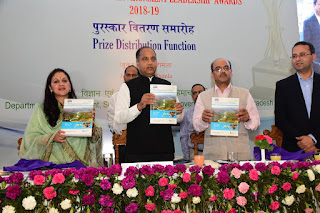 Govt. to launch scheme to buy back non-recyclable polythene: CM

Jai Ram Thakur flagged off awareness rallies on this occasion in which around 600 students of from 30 schools of the town participated. He also unveiled the book "compilation of best practices on environmental Excellence" besides other awareness material. He also gave away the prizes to the winners of different categories for remarkable contribution by the institutions and individuals in promotion of environment protection and conservation and sustainable development in the State. The awards were in the form of citation, memento along-with cash prize of Rs. 50,000 as 1st prize and Rs. 25,000 as 2nd prize.

He announced that the state government would launch of scheme to buy back non-recyclable polythene on fixed price. Besides, he also launched new bags launched by Department of Environmental, Science and technology on this occasion.

While congratulating everyone on World Environment Day and appreciating the contribution of various stakeholders in the conservation of environment, the Chief Minister said that India is a country of saints and sages who gained wisdom amidst clean and safe environment. He said that we have achieved remarkable developed over the years but it has come at the cost of environment degradation. There are many challenges in the state today and we have to contemplate on priority to avoid further harm to the nature.

Jai Ram Thakur appreciated the support given by people of the state in ensuring effective ban on plastic in state. Since, Himachal Pradesh is known for its natural grandeur and tourists from far-off places visit various parts of the state and it becomes our responsibility to provide them best facilities besides maintaining a healthy environment. He urged the people to supplement the efforts of the government in environment protection and maintaining cleanliness.

Chief Minister also launched the launched WaPIS (Water Purification Invigorative Scheme) under which, 38 types of plant species have been identified to treat waste water of various river streams. Initially, this project will be implemented in and around Sukhna Nullah (Parwanoo), Markanda river (Kala Amb) and Sirsa river (Baddi).

The Chief Minister, after taking cognizance of a news item that appeared in a daily newspaper, donated 'pattal' and 'dunna' making machine to 'Muskan' a female Self Help Group of Ghumarwin in district Bilaspur under Mujhya Mantri Green Technology Transfer scheme.

Speaking on the occasion, Additional Chief Secretary, Environment, Science & Technology and Chairman H.P. State Pollution Control Board R. D. Dhiman said that global warming has become a major concern for the entire world. Climate change has posed challenges many sectors like agriculture, industries etc. and we are working towards protection of environment in the state. He said the department is also working extensively with all stakeholders to curb pollution and maintain a healthy environment in the state.

The event also included presentations on best practices being implemented by various stakeholders in different fields of environment protection in the State.

The State Pollution Control Board organized an exhibition and Technology Demonstration on Air, Water Pollution and Waste Management. The aim of exhibition was to create public awareness on the issues pertaining to growing air and water pollution and waste management across the State.

In addition technological demonstration such as compost technologies, display of poly-bricks, cow dung made pots etc., demonstrated in the said exhibition. In the above exhibition pollution abating outdoor and indoor plants demonstrated and sold to the general public.