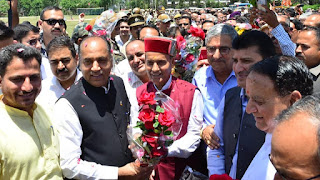 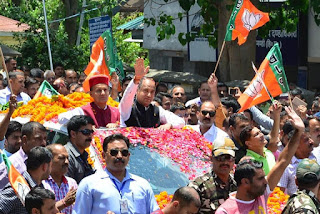 SHIMLA----  Chief Minister Jai Ram Thakur was accorded rousing welcome after he landed at Government Polytechnic College ground at Sundernagar during his maiden visit to Mandi district today after the landslide and unprecedented victory of the BJP in the State as well as country during the recently concluded Lok Sabha 2019 elections. Thousands of people lined up on both sides of the road enroute Sundernagar to Mandi and showered flowers and raised slogans in favour of the Chief Minister and BJP.

While addressing the "Jan Aabhar Rally" at the historic Seri Manch, Mandi, the Chief Minister thanked the people of the State for ensuring historic victory of the BJP in Lok Sabha elections. He said that the State BJP not only won all the four parliamentary seats, but also made a record by registering landslide victory in all the 68 assembly constituencies of the State. He said that the vote share of the BJP in the State was nearly seventy percent, which was highest in the country. He said that in the last Lok Sabha elections BJP got about 15 lakh votes, whereas, in the recently concluded elections, the party got about 32 lakh votes. He said that credit of this goes to each and every BJP workers of the State.

Jai Ram Thakur said that perturbed by the landslide and unprecedented victory of the BJP, the Congress leaders instead of taking the people's verdict humbly, are blaming the EVM's for their humiliating defeat. It was surprising that when the Congress succeeded to win in Rajasthan, Madhya Pradesh and Chhattisgarh, the EVM's were fine, but when BJP wins, these leaders blames EVM's for their defeat which speaks of the double standards of the Congress leaders.

The Chief Minister said that one of the reasons of the humiliating defeat of the Congress was the derogatory and unmindful allegations made by the Congress President Rahul Gandhi against Prime Minister Narendra Modi. He said that people of the country completed discarded these remarks and voted in favour of the BJP. He said that the people of Mandi have also ensured that they were not a slave of a particular family and want development. He said that similarly, the BJP got unprecedented lead from Congress strongholds like Rohru and Rampur. He also thanked the Prime Minister for giving place to Anurag Thakur in his Cabinet.

He said that the strong leadership of Prime Minister Narendra Modi at the Centre has ensured that India emerge as world power. It was due to this reason that Pakistan today stands isolated and frustrated after the Pulwama terrorist attack and surgical strikes by India on terrorist camps in PoK.

State BJP President Satpal Singh Satti said that these Lok Sabha Election was a battle between two ideologies, one committed for making a strong India and another playing politics of opportunism. He said that defeat of Congress National President in the Lok Sabha election from Amethi was a verdict of the people against politics of opportunism. He thanked the BJP workers of the Country in general and of the State in particular for wholeheartedly supporting the policies and programmes initiated by the Union Government. He said that it was the charismatic leadership of Prime Minister Narendra Modi that the BJP won 303 seats, whereas Congress failed to win even one seat in seventeen states of the country. He said that the 'Tukde-Tukde' gang was completely wiped from the country in these elections.

Member of Parliament Ram Swaroop Sharma thanked the people of the Mandi for giving him historic victory in the recently held Lok Sabha Elections. He said that these elections were significant in many ways as the BJP got lead in all the 68 constituencies of the State. He said that the people of the State have given this mandate for a strong and vibrant India. He said that he would work with greater dedication and commitment for development of Mandi Parliamentary Constituency.

BJP Mandi President Ranvir Singh welcomed the Chief Minister and other dignitaries present on the occasion.