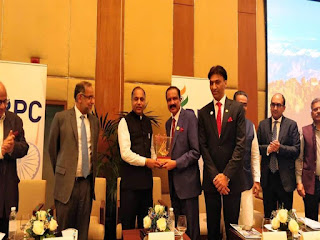 SHIMLA---Chief Minister Jai Ram Thakur while addressing the 'Road Show' organized by the State Government in association with the CII Himachal at Dubai, UAE on Tuesday evening invited the entrepreneurs to invest in Himachal Pradesh  as there was immense investment potential in the State. The event was hosted by Indian Business and Professional Council (IBPC).

Jai Ram Thakur thanked the participants for joining in big numbers which shows the interest and commitment of people of UAE to invest in India. He said that there has been a sea change in India since last four-five and Himachal Pradesh has also strengthened itself in these years. He invited the business and industry fraternity to come forward and explore opportunities to collaborate and invest in Himachal Pradesh.

While briefing the audience about the outstanding sectoral policies being formulated by the State Government, the Chief Minister said that the State Government was providing several incentives to the entrepreneurs to invest in the State in order to facilitate investments across sectors. He saluted the spirit of people of UAE to excel in whatever they do.

Jai Ram Thakur said that the State Government was planning a Global Investors Meet at Dharmashala as an initiative being taken for the first time in Himachal Pradesh. He said that the State have advantages available with it which would make intentions and initiatives of the Government bear fruit. He extended a very warm invitation to the people of UAE to join for the Global Investors Meet and invest in Himachal Pradesh. He said that the State has a vibrant talent pool and educational eco-system with the presence of premier institutes of national repute. With a host of universities, engineering, management and medical colleges, the state ensures a steady supply of skilled human capital for the industries, he added.

The Chief Minister said that Himachal Pradesh is one of the most visited states of the country by the tourists of domestic as well as foreign and it offers visitors a variety of choices like adventure, wildlife, eco-tourism, heritage, spiritual, monuments, religious, skiing etc. The State Government was committed to make sustainable tourism as one of the prime engines of growth in the state by establishing it as a leading global sustainable tourism destination, he added.

Industries Minister Bikram Singh appreciated the spirit of people of different parts of India present in UAE and their concern for sustainable development of India. He invited the Indian business community in UAE to consider giving back to the nation they originally belong to by way of investing in India, creating employment and improve the lives of people.

Ambassador of India to United Arab Emirates Navdeep Suri detailed out about healthy and ever growing relationship between UAE and India. He talked about exception personal camaraderie shared by top leaders of both countries. He said that Prime Minister Narendra Modi was  awarded highest civilian award of UAE.

President, IBPC Dubai Nimish Makvana welcomed the Chief Minister and other members of delegation to the investment road show in UAE.

Suresh Kumar from IBPC Dubai appreciated the high growth rate of Indian economy. He said Himachal Pradesh is endowed with natural resources and will achieve its objective of investment attraction.

Consulate General of India in Dubai Vipul also  addressed the audience and said that various high profile meetings with Government of UAE and large business houses were organized with the Chief Minister in the last two days.

Chairman, CII Himachal Pradesh Harish Agarwal shared his experiences of twenty years of investment in Himachal Pradesh. He said that the State has hard working manpower, zero disturbance and effective mechanism of single window clearance for the benefit of the entrepreneurs.