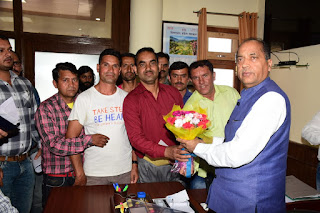 SHIMLA----Chief Minister Jai Ram Thakur has expressed happiness over the registration of Himachali Kala Zeera and Himachali Chulli Oil under the Geographical Indications (GIs) of Goods Act, 1999. He congratulated Himachal Pradesh Science Technology and Environment Council Congratulations for this achievement.

The Chief Minister said  that this effort of the State government is going to benefit thousands of Kalajira and Chuli oil producers and will not only be heipful in preserving the traditional products but will further increase the market potential resulting in a boost for the economy of the region.

He said that awareness workshops will be organized by the Himachal Pradesh Council for Science Technology and Environment soon at Kalpa and Rekong-Peo for the stakeholders of Himachali Kalazeera and Himachali Chulli Oil for formulating an Action Plan for future strategy.