Himachal to get special deal to accelerate development: CM 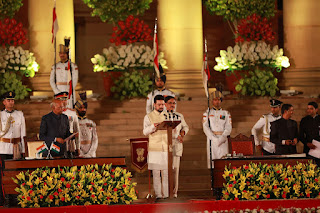 Himachal to get special deal to accelerate development: CM

SHIMLA----Chief Minister Jai Ram Thakur said that Himachal Pradesh would get special deal for accelerating the pace of development after installation of BJP led Government at the Centre headed by Prime Minister Narendra Modi. He said that the country would scale new heights in development and other spheres in the coming years and India would emerge as a world power under his able and dynamic leadership. Chief Minister said this during the informal interaction with the media.

The Chief Minister also thanked the Prime Minister for inducting Anurag Thakur, Member of Parliament from Himachal Pradesh into his Council of Ministers as Union Minister of State for Finance and Corporate Affairs.

Jai Ram Thakur  said that it was a matter of pride for the State that Anurag Thakur was allotted an important portfolio like Finance and Corporate Affairs. He said that another senior BJP leader from the State Jagat Prakash Nadda held key portfolio Health in Union Government in NDA-I during which State had been immensely benefitted from his benevolence.

While reply to query regarding Investors Meet, Jai Ram Thakur said that the State Government has planned to organize international road shows in Germany and Netherlands from 10th June, 2019  to showcase the immense investment potential available in the State. He said that efforts would be made to attract investments in various sectors like tourism, industry, power, food processing, IT, service sectors from the interested investors of these countries.