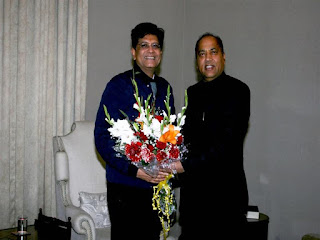 He discussed issues regarding expansion of rail network in Himachal Pradesh besides strengthening of the existing rail lines.

The Union Minister assured the Chief Minister that all possible support would be extended to the state to strengthen rail network. He said that speed of trains on Kalka-Shimla track would be increased besides providing facilities like operating free wifi, free ride to Baba Bhalkoo museum etc. He said that Vista Dome coaches would be introduced in the train to have better view of scenic beauty of the state.

Additional Principal Secretary to the Chief Minister and Principal Resident Commissioner Sanjay Kundu was also present on this occasion.