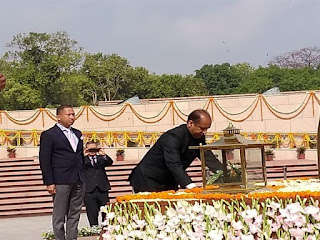 He said that it was due to the vision of Prime Minister Narendra Modi that such a magnificent monument had been constructed to honour the armed forces. The monument honours about 26000 martyrs who laid down their lives for the country during war or various operations and every citizen should visit this place to express their gratitude towards the martyrs. He said that the memorial will help in strengthening the sense of belonging, patriotism and national pride in our citizens.

The Chief Minister took a round of the memorial and evinced keen interest in the inscribed details of the soldiers.