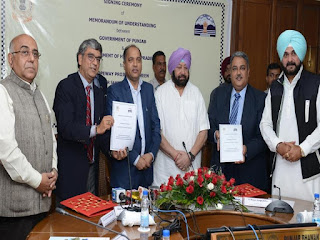 SHIMLA-----   MOU to build ropeway between Shri Naina Devi and Shri Anandpur Sahib was signed in Chandigarh today in the presence of Himachal Chief Minister Jai Ram Thakur and his Punjab counterpart Captain Amrinder Singh which would help in promoting religious tourism in Himachal Pradesh. The MoU was signed by Additional Chief Secretary Tourism Ram Subhag Singh from Himachal side and Secretary Tourism Punjab Vikas Pratap Singh from Punjab side.

Speaking on this occasion Chief Minister Jai Ram Thakur said that this ropeway will prove a emotional bridge between two states and this will promote religious tourism in both states. He said that dream of this project should have been realized much earlier and this will be a joint venture of both states.

Chief Minister  said that this ropeway would be built with an estimated cost of Rs. 210 crores and this will be constructed by "Shri Naina Devi and Sri Anandpur Sahib Ji Ropeway Company Pvt Ltd". It will have Board of Directors  of 10 members out of which five each will be nominated by both governments. The Chairman of Board of Directors would be nominated by the Punjab government and the Managing Director would be appointed by the Himachal government. Both the governments will deposit 50 Lakhs each as a initial investment.

Chief Minister said that the lower terminal of this project would be at Rampur near Shri Anandpur Sahib, Intermediate station will be at Toba in Himachal and the upper terminal point would be at Shri Naina Devi. The tourism departments of both the states would work as nodal agencies for this work.

Jai Ram Thakur  said that in the year 2012-13 the efforts were made to built this ropeway and 14 acres of land was also acquired for this but due to some circumstances the work could not be completed. He said that Shri Naina Devi is one of the 52 famous Shakti Peethas of the country and is one of the most prominent religious place for not only the peoples of our country but entire world. Likewise, Shri Anandpur Sahib is also a prominent religious place for the people of world. He said that this project would prove to be a milestone to not only boost tourism sector in both the states but would also be an epitome of strengthening the bond of love and brotherhood between two states besides facilitating the devotees visiting these two religious places.

Chief Minister said that 80 percent pilgrims come to Shri Naina Devi from Punjab and during last one year 20 Lakh devotees paid their obeisance in this Shakti Peeth.

Jai Ram Thakur said that for the construction of this impending ropeway he had taken up the matter with his Punjab counterpart Captain Amrinder Singh on 26th February 2018 and he immediately responded positively. He thanked Punjab Chief Minister Captain Amrinder Singh and termed inking of this MoU as a historic event.

Punjab Chief Minister Captain Amrinder Singh on this occasion said that with the construction of this ropeway the pilgrims of Punjab would get rid of the difficulty in reaching Shri Naina Devi Ji. He said that people of both the states would like to see this project completed at earliest and three year's time frame has been fixed for its completion. He said that the Punjab government is committed to realize this dream project. He said that this project would strengthen the bonds of brotherhood and goodwill between the two religions.

Tourism and Local Bodies Ministers Navjot Singh Sidhu said that inking of MoU by both the Chief Ministers on the auspicious birthday of Sheed-e- Azam Bhagat Singh is a big gift to the mankind. This is a pleasant  moment for both the states, he added.