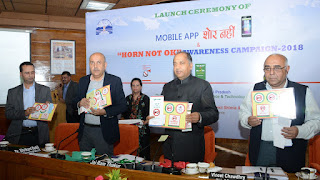 Speaking on the occasion Chief Minister said that the State was known for its salubrious climate and peaceful environment. Thus it is vital that each one of us contribute towards maintaining the pristine environment of the State, he added. He said that blowing horn is not only causing un-necessary noise pollution but it is also harmful for our health. He said that in the first phase this campaign has been launched in two cities of the State viz. Shimla and Manali. He said that both these towns are major tourist attractions and motivating the drivers not to use horns in these towns is a commendable initiative.

Jai Ram Thakur urged the media to help in spreading awareness regarding 'Horn Not OK' campaign so that drivers could be motivated to avoid use of horn in these cities. He urged the drivers, Police personnel to make this campaign a success.

The Chief Minister said that this App allows two types of users that are general public and officers, both are authenticated using the OTP. He said that all such complaints would be immediately made available through the App to the concerned DC, SP, SDM and SDPO who can add the action taken report on the app itself. The App would help authorities to locate the occurrence of the incidences using GPS which can be easily used to trace the path using Google maps.

Director, Environment, Science and Technology Department D.C. Rana welcomed the Chief Minister and others and gave a detailed account of ill effect of noise pollution on living beings.