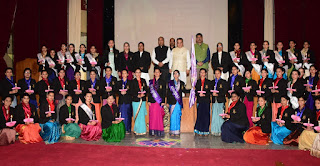 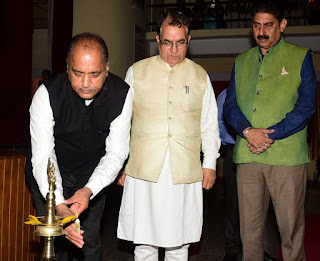 SHIMLA----  Chief Minister Jai Ram Thakur, while presiding over the Investiture ceremony of the Students Council of St. Bede's College here today said that the State Government would provide all possible assistance to the Government aided St. Bede's College. He ensured adequate staff and grant to the college so that it could emerge as a premier educational institution of the State.

Jai Ram Thakur said that the State Government was providing 95 percent aid to the Government aided Colleges in the State and it would be ensured that the studies of the students does not suffer due to need funds. He said that the State Government has made a provision of Rs. 7044 crore for the education sector during the current financial year. He expressed happiness that today girls were excelling in almost every field and are bringing laurels to their family, state and the country. Girls have proved time and again that if opportunity was given, they can achieve almost anything in their lives, he added.

Chief Minister said that St. Bede's was one of the most prestigious girls colleges of the region and the alumni of this college has made a mark in different fields be it films, industry, fashion, education or trade etc. He said that the aim of education should not only be scoring high grade in examinations, but education should bring empowerment to person and society all together. He said that this institution has ensured empowerment of the women and that was the biggest strength of the St. Bede's College. He said that the College has maintained its old glory which, indeed, was a matter of pride for the students and teachers.

Jai Ram Thakur said that the State Government was laying special thrust on education and empowerment of girls. He said that the Government has decided to open ten Residential schools in the State for imparting quality education to the students. Out of these ten schools to be opened during this year, five schools would exclusively be opened for the girl students, he added.

Chief Minister also honoured the elected Students Council Members on the occasion and wished them an eventful session and bright future. He hoped that the representatives would shoulder their responsibilities in a befitting manner.

Jai Ram Thakur announced Rs. 21000 from his discretionary fund to the college students who presented colourful cultural programme on the occasion.

Principal of the College Sister Beena John while welcoming the Chief Minister detailed the various achievements of the College. She said that the main aim of the College was to inspire young women to achieve academic excellence.

The Principal of the College also administered oath to the Students of SCA.

A colourful cultural programme was also organised by the students of the college.

MLA Rakesh Pathania, teachers and students of the College were present on the occasion among others.