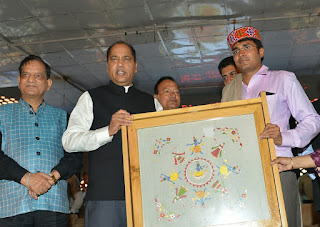 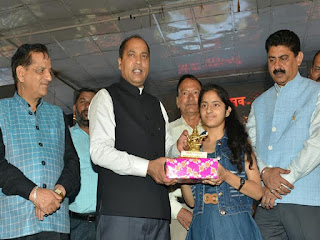 CHAMBA-----Chamba to get a Cement Plant, Primary Health Centre at Bari village and Veterinary Dispensary at Gate Village


Fairs and festivals play a major role in preserving the rich cultural heritage of the State and no society can progress without giving due respect for its culture. This was stated by the Chief Minister Jai Ram Thakur while presiding over the closing ceremony of International Minjar Fair at historic Chamba Chaugan at Chamba today.

Chief Minister said that Minjar Fair of Chamba was a unique example of communal harmony, peaceful co-existence and brotherhood.  He said that association of Mirza family, a Muslim family of Chamba with the celebration of this fair shows that people of Chamba lives with communal harmony and peace since time immemorial. He said that the fair was not only a rich repository of the diverse culture of the State but also a major source of healthy entertainment to the people of the region.

Jai Ram Thakur said that Minjar Fair was the most popular fair of Chamba which was attended by a large number of people from every nook and corner of the district. He said that the sports events organised on the occasion also help the rural talent to exhibit their skill and talent. He also congratulated the district administration for organising the Minjar Fair in a befitting manner.

Chief Minister said that during the seven month tenure of the present State Government, the sole aim has been to ensure equitable development of every section of society and every area of the State. Jan Manch programme of the State Government was aimed at ensuring prompt solution of the problems of the people at their doorsteps, he added.

He said that the Central Government under the dynamic leadership of Prime Minister Narendra Modi was poised to make India a world power. He urged the people to provide wholehearted support to the Union Government so that the pace of development could be ensured uninterruptedly for years to come. He said that very soon after completion of all the formalities, Chamba would get a Cement Plant which would not only provide employment and self employment opportunities to the local people but also ensure economic activities in the area as well.

Chief Minister was also presented a cheque of Rs. 10 lakh by the Deputy Commissioner on behalf of the District Administration towards the Chief Minister's Relief Fund on the occasion.

Deputy Commissioner Chamba and Chairman Mela Organising Committee Harikesh Meena welcomed the Chief Minister and others present on the occasion. He also detailed various activities and events organised during the International Minjar Fair. He said that the district administration not only ensured that the fair was organised in a befitting manner but it was also ensured that the fair not causes minimum pollution.