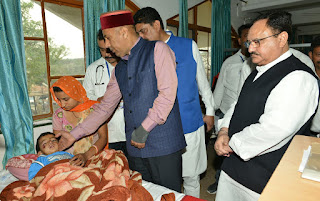 The Chief Minister wished them a speedy recovery and ensured all possible help to their family members.  He also appreciated the bravery and courage of Ranveer, a 10 year boy injured in this accident for reaching the road from the accident site and informing the people about this accident.

In total 23 children, 12 boys and 11 girls besides four adults lost their lives in this most unfortunate bus accident.

Shri Jai Ram Thakur said  the Government has ordered Magisterial  inquiry to probe the cause of accident. He said that all necessary steps would to taken to ensure that such incidents do not happen in future.

The Chief Minister said that the State Government was with the bereaved families of the children who lost their precious lives in this most unfortunate accident.

Earlier,  Jai Ram Thakur placed wreaths over the bodies of the victims and expressed his heartfelt condolences with the bereaved families.