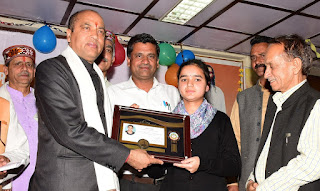 SHIMLA------Chief Minister  Jai Ram Thakur today inaugurated 'Chet Ram Gyan Bhawan' constructed at a cost of Rs. 60 lakh at Saraswati Vidya Mandir, Vikasnagarin Shimla here today. Speaking on the occasion, the Chief Minister said that in the era of cutthroat competition for success it was a matter of concern that the education system has been lagging in values and culture.

Shri Jai Ram Thakur said that we should work together for preserving  rich culture and tradition of our country. He said that students should be encouraged to have pride in their traditions. He said that the students of Vidya Bharti were excelling in every field and congratulated the students for their excellent performance in recently declared board results.

Chief Minister announced Rs 31000 from his discretionary fund for the students performing cultural programme on the occasion.

Transport and Forest Minister Shri Govind Singh Thakur said that the motto of education must be to serve the society so as to make India the 'Vishav Guru'. He said that Vidya Bharti was one of the biggest organizations in India working towards imparting value based education to students. He announced Rs 5 lakh for the strengthening of the Chet Ram Gyan Bhawan.

Organizing Secretary Himachal Pradesh Shiksha Simiti Shri Rajinder welcomed the Chief Minister and others on the occasion. He said that the Saraswati Vidya Mandirs throughout the State were providing value education to the students of the State.

Himachal Shiksha Simiti President Shri Deviroop presented vote of thanks on the occasion.

A colourful cultural programme was also presented on the occasion by the school children.