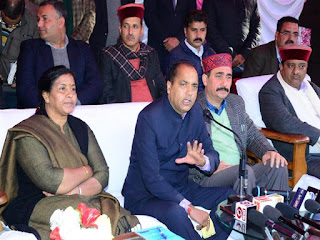 Dharmshala----Chief Minister  Jai Ram Thakur today inaugurated the bridge over Dodan Nallah on Kand Kardiyana completed with outlay of Rs. 1.08 crore providing all weather connectivity to Khaarti and Jule village in Kangra district. The 25 metre span bridge constructed under PMGSY will be connecting Palampur Assembly constituency with Dharamshala Assembly segment. The bridge has been completed within one year.

He also laid foundation stone of upgradation of five and a half kilometres road from Sakoh to Chellian to cost Rs 2.35 crore in Dharamshala constituency.

Earlier, while in Palampur constituency, the Chief Minister inaugurated the 58th Senior Volleyball Championship at Martyr Vikram Singh Batra Stadium. He also paid homage to the martyr by offering floral tributes at his statue.

The Chief Minister laid foundation stone of augmentation of Ghaad-Bhodhal lift drinking water supply scheme to cost Rs. 1.48 crore. This scheme when complete would benefit population of around 10000 of 20 villages.

The Chief Minister was accorded warm welcome on reaching Chamunda and Kand Kardiyana and other places on way to Dharamshala.

While talking to the media at Kand Kardiyana, the Chief Minister said that the government would not allow any type of mafia in the State may it be drug mafia, forest mafia or mining mafia.