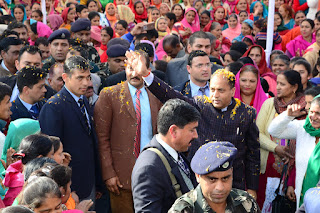 Dharmshala-----Chief Minister  Jai Ram Thakur during his brief halt in Tali late evening on Tuesday in Changer area of Jawalamukhi constituency, adjoining Nagrota Bagwaan listened to public grievances and announced Channelisation of Naked Khud. The Chief Minister said that the 30 kilometres patch length of Naked Khud from Sod-Kalan to Rainta bridge would be channelised and as per estimate already a sum of Rs 190 crore would be incurred on the same.

He also flagged bus service from Dharamshala to Dehra via Baroh and Khundian. He also directed to start work on and announced for water supply scheme Lohar-Lahri-Chakban-Gheen for which there was a provision of Rs 78 lakh. He also announced renaming Ayurveda Dispensary at Jandrah to Shaeed Jagdish Singh Rana Ayurveda Dispensary.

Late in evening he also presided over the Award Ceremony function of weekly 'Focus Himachal' at Tanda in kangra.

MLA Shri Ramesh Dhawala welcomed the Chief Minister on the occasion and thanked him for several announcements for the area.