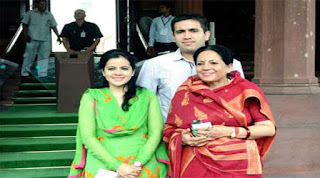 A division bench of ChiefJustice G. Rohini and Justice Jayant Nath will hear their plea on Wednesday. The Enforcement Directorate's action is "pre-emptive, presumptuous and arbitrary" and hence has "no authority to initiate attachment proceeding against the petitioners", the chief minister's daughter Aparajita Kumari and son Vikramaditya Singh said in their petition.

They sought the quashing of the ED's order of March 23 issued under the Prevention of Money Laundering Act (PMLA). The petitioners said the ED had attached Aparajita's movable assets worth over Rs.15.85 lakh and Vikramaditya's assets worth Rs.62.8 lakh.

The petitioners said their properties were attached even though they were not named in the first information report in the case. They said the ED decision was based on the Income Tax department's inquiries and investigation, which were themselves under challenge. The petitioners said there were no allegations against them, though there was an alleged InTome tax violation case against their father Virbhadra Singh.

That too is pending adjudication before the Income Tax authorities, they pointed out. The duo said they were also not summoned before the ED passed the attachment order. "No property of the petitioners could have been attached without giving them an opportunity to explain the sources of the property under attachment," the petitioners said. "The allegations in the Enforcement Case Information Report do not disclose any offence of money laundering and thus the proceedings under the PMLA is bad in law." In November 2015, the ED registered a case under the PMLA at its New Delhi office against Virbhadra Singh and his family members, including his wife Pratibha Singh.