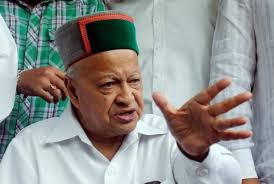 Vijyender Sharma
NEW DELHI/SHIMLA--- Himachal Pradesh Chief Minister Virbhadra Singh, an accused in a disproportionate assets case along with others, today said he had no problem in joining the CBI's investigation in the matter after the Delhi High Court asked him why he was not doing so.
"Your (Singh) name is there in the FIR. Why don't you join the investigation? The division bench order (of HP High Court) says that you will have to join the investigation. What is the issue in this? You should join the investigation," Justice Pratibha Rani asked senior advocate Kapil Sibal, who was representing Singh.
"If you (Singh) have the intention to join investigation, you do it. Where is the problem?" the high court asked Sibal.
Responding to the query, Sibal said "I have no problem." The court asked this while hearing arguments on CBI's application seeking vacation of Himachal Pradesh High Court's interim order of October 1, 2015 restraining the agency from arresting, interrogating or filing a charge sheet against Singh in the case. During the hearing, the court said it would refer the matter to the Chief Justice of Delhi High Court to decide whether a single judge bench can hear this plea as the interim order was passed by a division bench of Himachal Pradesh HC.
"This matter was transferred to the Delhi High Court but the fact remains that the interim order was passed by a division bench," the court observed, adding, "how a division bench order can be modified by a single judge?" "I will refer the matter to the Chief Justice so that the Chief Justice can see what is to be done in this," Justice Rani said and fixed the matter for tomorrow.
During the hearing, Additional Solicitor General (ASG) P S Patwalia, appearing for CBI, said the agency's investigation in the case was "seriously held up" due to the interim order passed by Himachal Pradesh High Court.
"We have done all other kinds of investigation in this case and the facts which have come up are very serious," the ASG told the court. He said as per the interim order, CBI can neither record Singh's statement, nor can it interrogate him and the agency cannot file a charge sheet in the case without taking the court's permission. "Recording of statement is a part of the investigation. We are unable to do it," Patwalia said. On February 25 on Singh's plea seeking quashing of FIR lodged against him and others in the case, the CBI had told the bench that its investigation was "held up" due to the interim order of Himachal Pradesh HC.