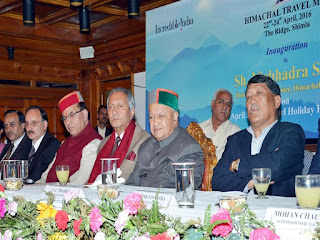 Private investors to be roped in for mega tourist activities

This was stated by Chief Minister Shri Virbhadra Singh in his inaugural address late last evening, on the launching of Himachal Travel Mart at Hotel Holiday Home, which will continue till 24th of April.

International buyers from Germany, United States of America, United Kingdom, France, Bulgaria, South Africa, Ukarine, Australia and Russia were participating in the event besides leading tour operators and online travel guides as EU-Asien. DE Media from Germany, liberty travels from USA, adonis from Russia were amongst others. Delegates from over 15 Indian Major markets like Rajasthan, Gujarat, Mumbai, Delhi, Banglore, Punjab and West Bengal also participated in the meet and were part of Himachal Travel Mart.

Apart from coming up with new rope-ways, Chief Minister said that the expansion of Kangra airport had been proposed and the initial land acquisition cost as per initial survey had been done. Besides, State Government was proactively working with Government of India and also had handed over some Government land to the Civil Aviation department where the Airport Authority of India was installing a Doppler VOR device which would help in navigation and improving visibility at Gaggal airport, said the Chief Minister.  Besides, the Jubbar-hatti airstrip had also been improved and widened, he added and the Supreme Court had directed Government of India to start air services to Shimla at the earliest. "We hope that soon the flights would be started for Shimla", he said adding that the Government was keen to strengthen the existing airports.

While our efforts are focused at realising the true potential of tourism in the state, we certainly do not wish to indiscriminately exploit our tourism wealth, he said adding that instead we intend to utilize it sustainably. The Chief Minister said that the Government had come out with Sustainable Tourism Development Policy serving as a blue print for all present and future tourism related activities in the state. The state has also formulated the Greater Dharamshala Tourism Action Plan, he added.

The Chief Minister said that the registered buyers from 10 countries to explore business opportunities for discerning travel and tourism products will help make the event one of the most sought after travel events in the country, he said.

Chief Minister said that India was an ancient civilisation and had a lot to offer to the off-shore visitors. Himachal on the other hand is a small hill state endowed with magnificent natural grandeur. Vast virgin areas were open to tourists with road connectivity and Himachal has a vast potential in respect of religious, adventurous, health tourism etc. "The people are God fearing and the State has a very rich culture", he said, adding that home stay for visitors was fast picking up and the Government was committed to give push to village and rural tourism as well. The home stay units in rural areas are also exempted from payment of luxury tax for a period of 5 years, till 2018, he said.

He hoped that the Himachal Travel Mart, would help in introducing more tourists destinations and attractions to the tourists and reinforce the Himachal Pradesh Tourism Brand amongst the stake holders. It would provide an interactive platform to encash upon tourism promotion opportunities and create economic momentum which would attract large number of tourists to our state, he said.

There has been a consistent increase in the tourist arrival in the state. During January to December 2015, Rs. 1.75 crore tourists visited the state with an annual growth rate of 7.46%. The state is yet to fully realise its tourism potential and we are working hard to pursue our goals, said the Commissioner Tourism, Shri Mohan Chauhan, adding that Tourism has been declared as an Industry in the State since 1984 and at present tourism was contributing about 8.25% to the State Gross Domestic Product.

He also gave a detailed presentation focusing the major adventure and religious tourists destinations in the state.