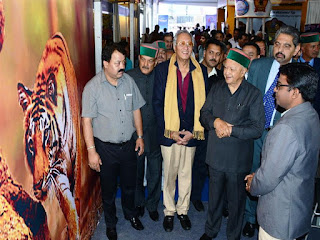 Shimla---Himachal  Chief Minister Virbhadra Singh today marked the opening of Himachal Travel Mart pavilion at the Ridge, Shimla in which apart from Himachal, exhibits for promoting tourism related activities of as many as 15 states were also displayed. The Chief Minister said that such type of marts go a long way in promoting the tourism activities and gives the much needed fillip to tourism industry.

Shri Virbhadra Singh said that the State Government was in the process of enacting a law against touting to prevent the fleecing of tourists, by unscrupulous elements in the State, adding further that tourism, as an activity, requires contribution from all stakeholders concerned. "I realize that the State Government has an important role in providing a conducive environment for it. We are up for the task at hand", said he; hoping great future for tourism in Himachal Pradesh and see the state emerge truly a "destination for all seasons and all reasons".

Speaking on the sidelines after opening the Mart, the Chief Minister said that the Government was in no mood to change the name of Shimla and other places in Himachal. Shimla is a well known and famous tourist destination and is known by its present name globally. Changing names was not a solution to everything, rather, someone would come up tomorrow and say to change my name also, and he quipped. Shimla is famous by its present name and would ever be so, he said.

He also negated the rumours of changes in Cabinet adding that there was no such move as of now.