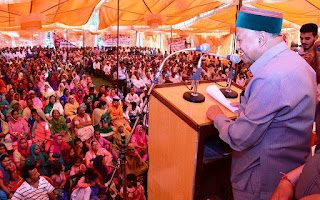 SHIMLA----The double standard politics and masked faces won't be tolerated within the party cadre. When any member of opposition wins time and again, it clearly indicates that it was not possible due to help of few so called leaders within the  party who play politics behind the curtain and in the  dark.

This was stated by Chief Minister  Virbhadra Singh while addressing a well attended public meeting at Kotla Kalan in Kutlehar assembly segment of district Una today.

Since Kutlehar had witnessed lot of development in the past but no  Congress candidate had ever won from Kutlehar from last 35 years and similar was the condition of Una assembly segment as from last 15 years, the Congress men in Una were also facing defeat.

He said that he had identified such black sheeps in the party in Kutlehar and Una assembly constituencies. There were few leaders who try to take his shelter and lure him but he was well aware of their motive, he said. The double standard politics should be avoided and if anyone wants to join opposition, he was free to go.

He said that such people who cheat with party cadre were like double edged weapons and the people have to be aware of them.

The Chief Minister said that BJP leaders in Una were not such big-wigs that they can't be defeated, but they were winning elections due to the Congress men who were cheating upon Congress cadre and helping them.

He also exhorted the newly elected panchayat representatives to work sincerely and dedicatedly for one and all irrespective of political affiliation. He said that adequate funds would be provided to panchayats for its development.

He said that his priority had been development and redressal of the grievances of the people of the state.

Announcements made by CM

• Commerce classes from this session in GSSS Dangoli

• A recreation room for elder persons and a Gymnasium in Arniyala GP and directed the Deputy Commissioner to take early action,

• He also announced for augmentation of drinking water supply scheme at Ajnoli and directed the concerned department to conduct survey.

Industries and I&PR Minister, Shri Mukesh Agnihotri, while speaking on the occasion said that Shri Virbhadra Singh was a seasoned politician and was the tallest leader of Congress in the country respected by all. He said that the state BJP leaders, in unison with one Central Minister remained busy for three years hatching conspiracies against the Chief Minister but their ulterior motives did not fructify.

He criticised the move of Central Government was imposing cess on jewellery and also for declining to pay rate of interest by banks on the money deposited by the people giving plea that the government takes care of and provides security, and therefore the banks won't pay interest on money deposited in the banks. He also lashed out at central leadership which failed to keep to the promises made to the people at the time of Lok sabha elections.

Pradhan, Kotla-Kalan, Ms. Pooja Kumari welcomed the Chief Minister and other guests present on the occasion and urged for upgradation of Kotla Kalan High School, starting of commerce classes in GSSS Dangoli and an irrigation and water supply scheme for the area at Ajnoli.

The other public representatives who spoke on the occasion also demanded a gymnasium and a room for recreation for elder persons.