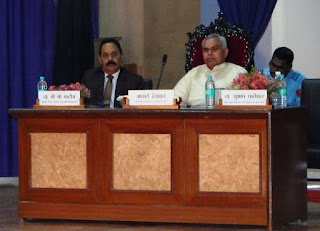 PALAMPUR------Governor Acharya Devvrat participated in the discussions on the second day of the four daylong seminar on Zero Budget Natural Farming organised by CSK, Agriculture University Palampur in Kangra district.

Addressing the gathering, the Governor appealed the farmers to adopt Zero Budget Natural Farming for increasing the production in their farms besides maintaining the productivity of the soil. He said farmers should be encouraged to rear domestic cow instead of hybrid one imported from abroad. He said that the cows found in hilly areas were significant in many ways.

He said that natural farming was healthy and conducive for environment. He added that it was essential to shift from chemical farming to natural as the fertility of the soil declined and many health problems persisted due to chemicals used in abundance in agriculture crops which was a matter of concern. He hoped that the practice and suggestions given by eminent scientist and Padamshree Dr. Subhash Palekar would go a long way in helping the farmers. He said that it would also serve the scientists working in agriculture field in giving better results.

Acharya Devvrat urged the young scientists of the University to actively participate in the seminar and take benefits of the ideas and research of Dr. Palekar in the field of zero budget natural farming.

Earlier, the Governor also visited the department of Tea Husbandry and Technology, CSK University and enquired about the processing technology, fermentation, rolling, drying and grading process in the processing unit of the department. He also visited studio for instructional media production under experimental learning project for entrepreneurs funded by Indian Council of Agriculture Research, New Delhi. He also interacted with the scientists and staff members of Department of Food Science, Nutrition and Technology and Family Resources Management and appreciated the products exhibited there.

On the second day of the seminar, Dr. Subhash Palekar Eminent Scientist and Resource Person spoke on various aspects of Zero Budget Natural Farming. He said that only 35 crore acre lands were available for agriculture purpose in the country. He added that 33 percent forest cover was required for the protection of environment. Although, less than 10 percent green cover was available with us, he stated. He said that to produce maximum or double agriculture crop in a limited area, process of natural farming should be adopted. He also detailed about the technique for the preparation of 'Jiwamrita'