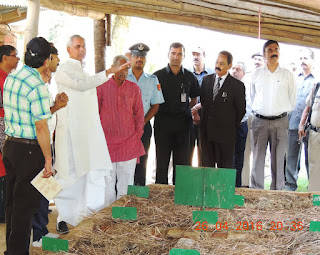 PALAMPUR----- Governor Acharya Devvrat said that 'Zero Budget Natural Farming' was a better option for making the Nation self-reliant in agriculture sector. He said that the produce out of natural farming helped not only in healthy living but was environment friendly too. He urged the farmers to adopt natural farming (Rishi Kheti) for getting toxic free and nutritious food production.

The Governor was speaking while inaugurating four day long seminar on 'Zero Budget Natural Farming' organized by CSK Agriculture University, Palampur in Kangra district with the help of Eminent scientist and Padam Shri Dr. Subhash Palekar, who was a pioneer of 'zero-budget spiritual farming', today.

The Governor urged the farmers to adopt traditional farming to enhance the quality of their produce and to get better prices in the market. He expressed concern over the use of pesticides and chemical fertilizers which not only diluted the health content in crops but also affected the fertility of the soil. He called upon the scientists of the University to hold camps across the state to educate the farming community about traditional and Natural farming and added that special awareness should be generated for adopting zero-budgeting for improving the existing agriculture practices in the State. He also asked the scientists to conduct intensive research and develop new techniques besides improving the existing ones especially in natural farming. He said the research conducted in laboratories should reach the fields and farmers.

Acharya Devvrat appealed the farmers to adopt Zero Budget Natural Farming for increasing the production in their farms besides preferring Indian cow breeds. He said that the development of the country depended upon the growth and prosperity of farming community. He said that nothing could be implemented without any reason and the reason behind adopting natural farming was before us. He said that number of diseases had been increased during last decades due to chemical farming and it was the right time to shift from chemical farming to natural farming.

He said that best part of adopting natural system of farming was that it has no financial implication and the farmers would not have to purchase any output from the market as it was prepared naturally by the farmer itself.

He urged the farmers and students of the University to participate in such seminars as it was organized with the purpose of generating awareness about traditional farming.  He also urged the scientists to come out with new techniques and information to update farmers for improving their farming skills and methods.

The Governor appreciated the efforts of eminent scientist to revive the concept of zero budget natural farming in the country. He also thanked him to encourage the farmers for adopting natural farming for the benefit of the people in large.

He appreciated the University for this Initiative and exhorted the students and scientists to religiously attend the workshop for four days. He expressed the hope that the workshop will enable the participants to think afresh and open new vistas in their lives.The Governor thanked well known exponent of natural farming Padamshree Subhash Palekar for making  50 lakh farmers follow the concept of natural farming.The Governor also asked the scientists to listen and learn the new concepts so that it is properly transferred to the farming community.

On the occasion, Shri Dr. Subhash Palekar said that organic farming was based on composting and vermin compost techniques which pollute the atmosphere, as the resultant manures were known to emit huge quantities of greenhouse gases (methane) and Fukuoka approach only leads to excessive weed growth in farms, affecting crop yields.

He said that his method largely draws from ancient Indian farming techniques, at the heart of which was a formulation called 'Jiwamrita'.

He said that the so-called modern agricultural practices taught at universities were, indeed, detrimental to farming. The only terms that got repeatedly hammered in students' minds were fertilizers, hybrid seeds, insecticides, irrigation, and deep trenches, he added. He said that so deeply entrenched were these concepts that they made us unable to think beyond and practice anything other than chemical farming.

He explains, "The farmer needs to apply to the crop a dose of Jiwamrita — a fermented solution containing 200 litres water, 5-10 litres cow urine, 10 kg dung, 1 kg each of gur (jaggery) and besan (gram flour) for every acre. The other important thing is to spread a carpet of harvested crop residue between crop rows, which helps to absorb moisture from the atmosphere and also prevents emergence of weeds."

According to him, Jiwamrita basically nurtures thousands of bacteria essential for healthy crop growth. The urine and dung used in the formulation, he insists, should be from indigenous cattle: "one desi cow can nourish 30 acres".

He stated that the term zero-budget farming was self-explanatory. All you spend was on seeds and Rs 5,000 per acre for laying the harvested residue carpet, which could be covered by the inter-crop raised on it, he added and said that whatever was obtained from sale of the main crop was the income.

Sh K. K. Katoch Vice Chancellor welcomed and honored the Governor and others and detailed about the activities of the University. He said that the university had already introduced the concept of natural farming in its post graduate level.

Progressive farmers, faculty members of the university, officers of the district administration, students, representatives of various non-governmental organizations and other prominent people were also present on the occasion