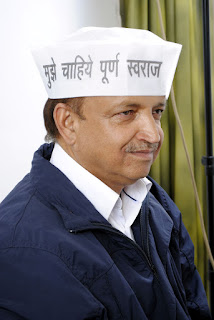 Shimla ----After the tremendous response to the party's campaign in neighbouring Punjab, the Aam Aadmi Party has decided to begin operations in Himachal Pradesh also. The party is organising a mega "Himachal Badlo Rally" in Una on April 5 to expose both the BJP and Congress and their compromise on corruption, said Subhash Chand, State spokesman for the party.

The people of the hill State will be made aware of the family rule of both the major parties and their unbridled involvement in corruption, Mr. Chand said.

The AAP has created ripples amongst the corrupt Akali Dal, BJP and Congress politicians and a similar drive would be initiated in the hill State also to expose the joint plunder by Congress and BJP politicians, Mr. Chand said.