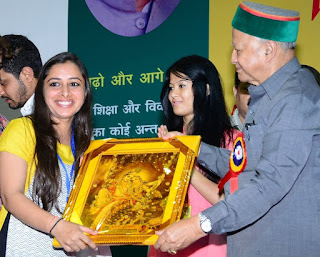 Vijyender Sharma
Shimla---Notwithstanding the Congress high command and party MLAs extending their solidarity to Himachal Pradesh CM Virbhadra Singh at a meeting in Delhi on Saturday, the party leadership is on tenterhooks as Singh is facing key legal tests in Delhi on Monday and Tuesday.
The leadership is aware that it may be forced to work on a delicate contingency plan should the CBI get the Delhi HC to cancel the CM's bail in a disproportionate assets (DA) case.
Taking no chance, Singh will be defended in the courts by the top legal eagles available to the Congress: Kapil Sibal in the DA case and Abhishek Singhvi in a case on Tuesday where Singh is seeking a stay of the Enforcement Directorate attaching his property in another case.
The fear that powerful interests in the BJP and the Union Cabinet are "leaving no stone unturned to try and dislodge the CM" is adding to the alertness.
Though the AICC and party MLAs, as of now, are rallying behind him, the leadership is also aware of the need for a contingency plan if the court orders the cancellation of CM's bail and gives the CBI his custody, something that could make his continuation in the top post legally and politically tricky. "We are fully with Virbhadraji and are hopeful that he will win his legal cases," said a senior AICC functionary.
Given Singh, among the few remaining entrenched satraps of the party, remains the face and strength of the Himachal Congress with overwhelming support among party MLAs, any legal setback for him could make the task of political repair, including looking at a change of guard, a task.
Though a group of over a dozen senior Congress MLAs backed Singh at a meeting AICC general secretary Ambika Soni called on Saturday as a solidarity show, his in-house critics such as Viplove Thakur, Kaul Singh Thakur and Asha Kumari, according to sources, also made it a point to underline in the meeting the need for the CM to decentralise his powersharing approach.
Senior Congress leader Anand Sharma, an old face of the anti-Singh group, has been of late maintaining a neutral position, busying himself with national politics. As his fate hangs in balance in court, Singh met Sonia Gandhi twice over the past week and the Congress chief has been engaging all stakeholders in the state and AICC as part of political and legal defense of his case. Sensing the cases are entering a delicate phase, the BJP members in HP had stalled the proceedings of the House last week, demanding the CM's resignation.