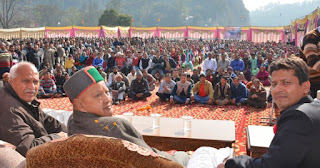 DHARMSHALA-----Chief Minister Virbhadra Singh has categorically denied regarding any such letter written to GoI for setting up the Central University (CU)  campus at Dehra in 2013, as was being claimed  by former BJP Minister Kishan Kapoor, in a press conference he held at Dharamsala today.

His  statement that the government of Himachal Pradesh in 2013 has written a letter to Union HRD Minister for setting up CU Campus at Dehra is totally false, fabricated and politically motivated.  He said that since from the very beginning the congress decided  for CUHP at Dharamsala and even the Cabinet had agreed  regarding setting up one consolidated campus of the University  at Dharamsala.

The facts were being distorted by the BJP leaders and they were not only trying to mislead the people of the State  but had  also misinformed the Union Human Resource development Minister on the issue.

A huge tract of land has been finalised at Jadrangal near Chamunda in Upper Dharamsala for the CU. The land itself is appropriate for setting up CU as it has a vast open space said the Chief Minister adding that  the affiliated colleges of the CU,  as engineering college, could be set up at Dehra.

The Chief Minister warned BJP leaders to stop misguiding the people of the State and abstain from the malicious propaganda on the instance of MP, Anurag Thakur.

He said that Anurag wants the university to be set up at Dehra which falls in Hamirpur parliamentary constituency and for the very purpose is opposing the decision of the state government.

Chief Minister said that the it was P. Chidambram, the then finance Minister in UPA government who conveyed the decision of UPA government  for setting of CUHP and Indian Information of Technology (IIT) in the state. The Cabinet then only decided that IIT would be set up at Mandi and CU at Dharamsala or nearby.