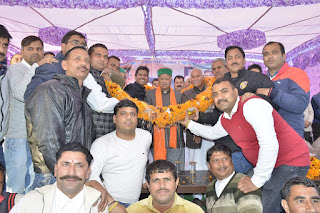 Dharamshala, 02 February - Chief Minister Virbhadra Singh said the State Government had given added priority to provide irrigation facility to the farmers so as to enable them to boost their economy. He said was provided irrigation facility by spending Rs. 400 crore during last three years.

Shri Virbhadra Singh, who was addressing a public meeting at Jawali in Kangra district today, said work was on progress on Rs.180 crore Chhonchh Khad Channelization Project and Rs 205 crore Phinna Singh project in Kangra district, while the work on Sidhata canal was almost complete which would irrigate 3000 hectare area.

He said that new state of art Industrial Areas were  being established at Kandrauri in Kangra district and Pandoga in Una district at an estimated cost of Rs 95.77 crore and Rs 88.05 crore respectively, which would provide direct and indirect employment to a large number of youth of the state.

He inaugurated the new OPD block in CHC building at Jawali completed with an outlay of Rs. 1.65 crore. The Chief Minister also laid foundation stone of Football stadium at Jawali to cost Rs 3.34 crore.

The Chief Minister announced Rs 60 lakh for washrooms/ bathrooms in old building of CHC at Jawali and directed the PWD to undertake the work soon. He assured to fulfill the demand of upgradation of various schools in Jawali constituency.

He assured the local Bar Association to fulfill their genuine demands in the times to come.

Chief Parliamentary Secretary, Shri Neeraj Bharti said that Shri Virbhadra Singh was the real benefactor of the people of the State and whenever he visited the constituency he had always given for whatever we have asked. He thanked the Chief Minister for various developmental projects in the constituency.