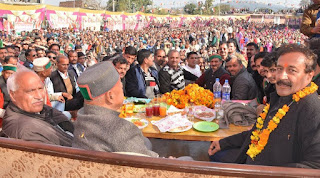 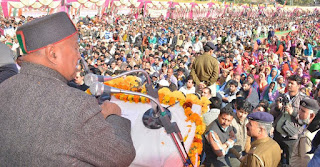 Dharamshala, 03 February - Chief Minister Shri Virbhadra Singh today underlined the need for taking up effective steps to check illicit drug trafficking, especially on the border areas of the State as youth were falling prey to drugs. He said youth were the pillars of healthy society and the need of the hour was to channelize their energy in constructive activities so that they could contribute for the welfare of the society.

The Chief Minister was addressing a public meeting at Jassur in Nurpur constituency of Kangra district today.

He also cautioned the chemists to abstain from selling un-prescribed drugs and directed the concerned authorities to keep close vigil on sale of such drugs and initiate strict legal action against the defaulters.

Referring to the development of Kangra district, he said 8842 hand-pumps were installed in the district during last three years and 62 irrigation schemes were in progress including Rs 205 crore Phinna Singh irrigation scheme at Nurpur and Rs. 180 crore Chonch Khud channelisation in Indora.

He said that as many as 66,450 persons were being provided social security pension in the district and during the last three years a sum of Rs 43.55 crore had been spent on giving pensions to people in district.

Shri Virbhadra Singh said that new state of art Industrial Areas were  being established at Kandrauri in Kangra district and Pandoga in Una district at an estimated cost of Rs 95.77 crore and Rs 88.05 crore respectively.

Shri Virbhadra Singh announced Ayurvedic Health Centre at Charuri and Drug Rehabilitation Centre at Nurpur and upgradation of Civil Hospital Nurpur to 135 bed hospital. He announced Indoor Youth Stadium to be constructed at Nurpur, PWD, Rest house at Suliali, Bus Stand at Nurpur and Sub-Division of Pollution Control Board at Nurpur. He also announced construction of link road Badui Kuttain in GP Badui, construction of link roads from Kukher to Gurchal in GP Ther, from Gangath to village Tariar Anoh  in GP Anoh, from Kamalahar to Murdial har in GP Hatli Jamwala, link road for village Ghatta and road from Rit to village Kursan Behdi. He also announced to start science and commerce classes in GSSS Sukhar, starting of science classes in GSSS Aund and upper  Khanni.

The Chief Minister also announced a sum of Rs 10 lakh for Community Centre at Jassur and three lakhs for Panchayat Ghar at Kamnallaha.

Earlier, the Chief Minister laid foundation stone of Rs 37.50 crore project for improvement and up-gradation of Nurpur-Sanjhi Nallaha-Lahru-Tunnu-Hatti road upto Punjab border and directed to complete the work within a year.

He dedicated a bridge over Harad Khud on Shaheed Joginder Singh road from Hindora Gharat-Hatli Jamwalan-Bhanodu via Pachan road completed with an outlay of Rs 1.88 crore and also laid foundation stone of up-gradation of road from Charuri to Gheta via Mehta Gurah to cost Rs 3.30 crore.

Local MLA Shri Ajay Mahajan listed the developmental activities in his assembly segment. He thanked him for laying foundation stone of Rs 37.50 crore  for improvement and up-gradation of Nurpur-Sanjhi Nallaha-Lahru-Tunnu-Hatti road and dedicating a bridge over Harad Khud and other development works. He also placed local demands of the area including drug re-habilitation centre at Nurpur and Bus Stand for Nurpur.