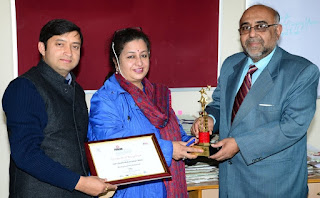 SHIMLA---The Telestroke project of Himachal Pradesh was awarded as best      e-health initiative in National Conference on Innovations in Governance at the elets PUNJAB SUMMIT 2016 held at Chandigarh yesterday. The award was handed over by His Excellency Governor of Punjab and Haryana Sh. Kaptan Singh Solanki to Dr Purnima Chauhan Secretary Administrative reforms and Dr Sudhir Sharma, Head, Dept. of Neurology IGMC, Shimla.

Telestroke innovation lies in the intelligent convergence of internet and mobile telephony for a swift medical response at the nearest health facility within the 4.5 hour window after stroke happens. Since its inception in July 2014 Telestroke has saved more than 100 stroke patients up to January 2016 through 17 health centers in Himachal Pradesh. These health centers must have fundamental equipment like a CT scan, ECG and blood sugar testing.

"HP Telestroke" android application has also been launched under this initiative.This application at one click alerts people about stroke symptoms; calls 108 national ambulance and pinpoints the nearest equipped stroke treatment center so that timely treatment is rendered. This app can be downloaded at google playstore.

Stroke has emerged as a second biggest killer of mankind world over after cardiac diseases. According to World Stroke Association one out of six persons is expected to suffer from stroke globally and every six seconds a person gets a stroke. In India more people die of stroke than infectious diseases like tuberculosis. Stroke prevalence in India ranges from 84 to 424 per 100,000.It is estimated that H.P. should have 15,000 to 20,000 patients of stroke and  every year 5000 – 10,000 new patients suffer stroke. This number is bound to increase with increased life expectancy and aging of population. After a stroke about 50% patients do not survive beyond 6 months and 25% become dependent for life. So not only mortality but morbidity due to stroke is also overwhelming.

However in March 2014 under the guidance of Stroke Specialist Prof. M.V. Padma from All India Institute of Medical Sciences, New Delhi and on the initiative of Additional Chief Secretary Health Himachal Pradesh Telestroke Project was envisaged. All the government hospitals with CT-Scan facility were roped in as 17 primary stroke centres. All the four neurologists were made available on phone 24x7 and whenever any ischemic stroke came in window period, they were to be contacted. It was decided to use social networking sites like "Whatsapp for transmitting CT-scan images to neurologists for consultation. Without any extra infrastructure requirement or any new manpower the project was finally launched in May-June 2014.

Within one month the first ever patient of acute ischemic stroke was successfully treated at a district hospital Nahan without on site presence of a neurologist. This first case proved the feasibility of Telestroke project. Telestroke is the magic of improving service outreach for all citizens by converging information technology platforms innovatively without incurring any extra infrastructure and manpower.