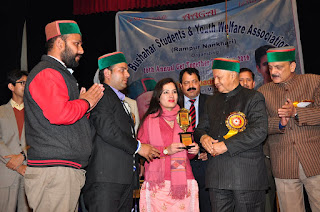 SHIMLA---Virbhadra Singh, Chief Minister of Himachal Pardesh has stated that family members of martyrs of Pathankot terror attacks are against the India Pakistan T 20 match, scheduled to be played at Dharmshala on Mar 19. He stating it should not be held as most of Ex-servicemen and people of district were lodging their protest against it.Interacting with media person outside the state legislative assembly , Mr Singh said people were showing strong resentment against the Indo Pak Match however, people were not against other matches of the tournament. Two soldiers who lost their lives in Pathankot terror attack belonged to Kangra and now their family members were showing resentment to hold Cricket match between India and Pakstan at Dharmshala International Cricket Stadium.Mr Singh said the matter also figured in the Congress legislative meeting held at Oakover on Feb 24 in which most of Congress legislators said that people of Kangra, ex-servicemen and family members of martyrs were opposing this match.

"If people of Kangra and state are against the match BCCI should not held it here as number of Servicemen given the call to protest against it. State government is bound to provide all its support if it would be held however the call to considers the demands of people should be taken by BCCI and it would be responsible for any outcome" Mr. Singh told media persons.He said member of his cabinet Mr. G.S.Bali have strong reservation to hold this match inwake of terrorists attack in the country. He said that If family members of martyrs did not want it it should be given consider at this point of time. Meanwhile, addressing to Media persons here on Wednesday Transport Minister G.S. Balli given ten days ultimatum to the BCCI to shift this match from here . He threaten to launch a district wide protest his demand was not consider. Lok Sabha Member from Kangra Mr Shanta Kumar, Former Congress Minister Mr. Vijay Singh Mankotia, Fromer MLA Mr. Rakesh Pathania and former BJP minister Mr. Kishan Kapoor were also oppposing this match with Pakistan at Dharmshala.All these leader now decided to set on Dharna before the Shahid Park at Dharmshala near the HPCA stadium as member of Pathankot martyr families decided to sit on Dharna before the scheduled match to press the demand to canceled it