CM stresses for preservation of rich culture of the State 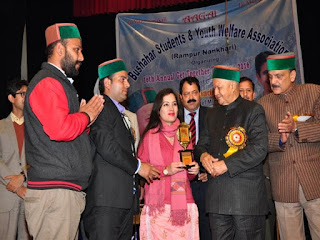 CM stresses for preservation of rich culture of the State

SHIMLA------     Chief Minister, Shri Virbhadra Singh while speaking on the occasion of 16th annual get-together function of Bushahr Students and Youth Welfare Association, here today said that it was a matter of great pride that the ancient old culture of the Bushahr estate was being carried forward by the younger generation. He urged the youth for preservation of the traditional customs and culture, besides dedicating themselves for the unity and integrity of the country.  Chief Minister said that it does not matter where we stay, or settle in any part of the world, our customs and culture confirms our distinct identity and it should be conserved at any cost.

He exhorted the youth to adopt the latest scientific techniques and technology in the present era of globalisation in order to contribute in development of the Nation.

Chief Parliamentary Secretary, Shri Nand Lal also  spoke on the occasion and congratulated the association  comprising of the Rampur and Nankhari student union for organising the function jointly for the first time under the banner of Bushahr Students and Youth Welfare Association. He also listed the development activities being undertaken in Rampur area.

A colourful cultural programme was also presented by the association members.