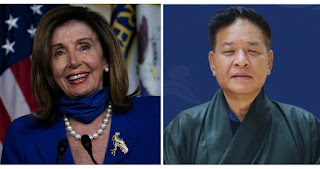 Dharamshala---Following the announcement of Speaker Nancy Pelosi's retirement from the leadership of the US House , Tibetan Prime Minister in exile, Penpa Tsering wrote to Speaker Pelosi, who has served for two decades congratulating and expressing her gratitude for being a constant supporter and a friend of Tibetan Spiritual Leader the Dalai Lama and Tibet.

"Your presence at the helm of the House has been a great source of hope, inspiration and, above all, assurance. The Tibetans are forever grateful for your friendship with the Dalai Lama and for your unparalleled leadership and support in strengthening bipartisan support for Tibet in the US Congress and advancing the cause of Tibet as per the hopes and aspirations of Tibetans inside Tibet," writes Tsering in the letter.

He continued, "We are comforted by the fact that we will continue to witness your fearless leadership and service as an honourable member of Congress in the coming year. I look forward to your guidance and advice on our future course."

He also conveyed his comfort in learning about Paul Pelosi's steady recovery as prayers were offered at monasteries for Paul's swift and full recovery.

"We join with well-wishers worldwide in praying for your family's continued safety and wellbeing," he added .

The Tibetan leadership in exile led by His Holiness the Dalai Lama has also written to express sympathy over the physical attack on Paul Pelosi last month.